Roatan shark dive may offer the most thrilling 40 minutes you’ll ever spend underwater. In Roatan you have the unique opportunity to observe sharks at close range, in their natural environment.
“Cara a Cara Point” is located in the south side of Roatan, about 20 minutes by bus and 15 minutes by boat from the TGI Diving Roatan.
The dive site is about 2 miles off -shore, and often the see can be rough.
The TGI Diving strongly recommend a regular dive before doing the Shark Dive, but anyways, a professional TGI Diving Dive Master will be with you during your unforgettable dive!
The dive site offer an incredible biodiversity as sea sponges, groupers, big barracuda and jack fish. Hammerhead Sharks are often seen.
The more common sharks at “Cara a Cara Point” are the Caribbean Grey Reef Sharks (Charcarinus Perizi).MAX DEPH: 20-23 Mt/ 60-68 Ft
DIVE TIME: 40 Min.

SOME INFO ABOUT SHARKS:

Sharks are a type of fish with a full cartilaginous skeleton and a highly streamlined body. The earliest known sharks date from more than 420 million years ago, before the time of the dinosaurs.
Since that time, sharks have diversified into 440 species, ranging in size from the small dwarf lanternshark, a deep sea species of only 17 centimetres (7 in) in length, to the whale shark, the largest fish, which reaches approximately 12 metres (39 ft) and which feeds only on plankton, squid, and small fish through filter feeding. Sharks are found in all seas and are common down to depths of 2,000 metres (6,600 ft), and some live even deeper but they are almost entirely absent below 3,000 metres (9,800 ft). They generally do not live in freshwater, with a few exceptions such as the bull shark and the river shark which can live both in seawater and freshwater. They respire with the use of five to seven gill slits. Sharks have a covering of dermal denticles that protect their skin from damage and parasites and improve fluid dynamics so the shark can move faster. They have several sets of replaceable teeth.
Well-known species such as the great white and the hammerhead are apex predators at the top of the underwater food chain. Their extraordinary skills as predators fascinate and frighten us, even as their survival is under serious threat from fishing and other human activities. 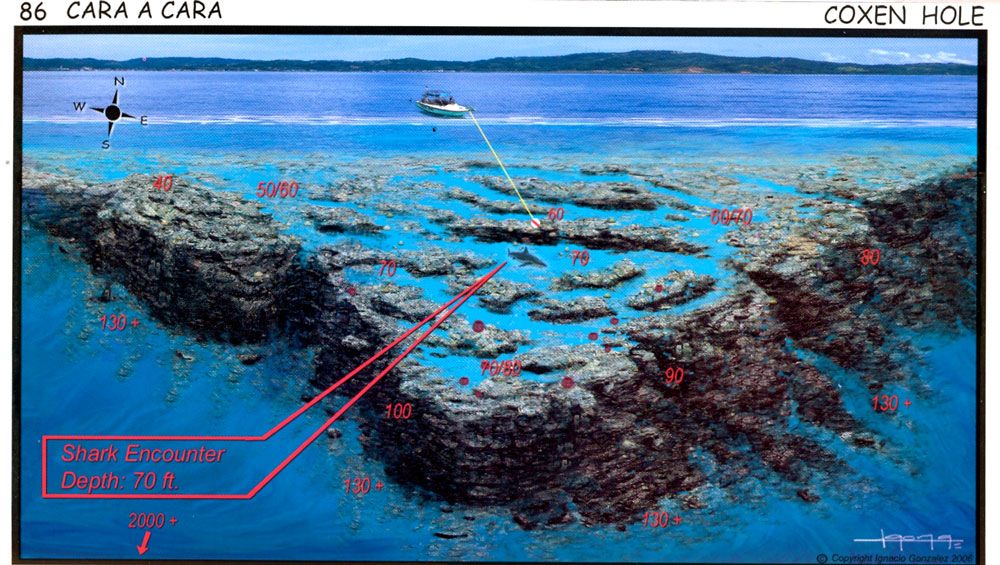 Whenever we go to Bears Den we go for double tanks. Its a 20 minute boat ride. The reef provides lots of canyons, a very alive wall, a big cave and lots of groupers and snappers.

A shallow dive characterised by the sandy bottom, with pinnacles of coral protruding upwards and very good chances to see turtles here. Perfect for no experienced diver that want to have the chance to see big fishes like Eagle Ray. 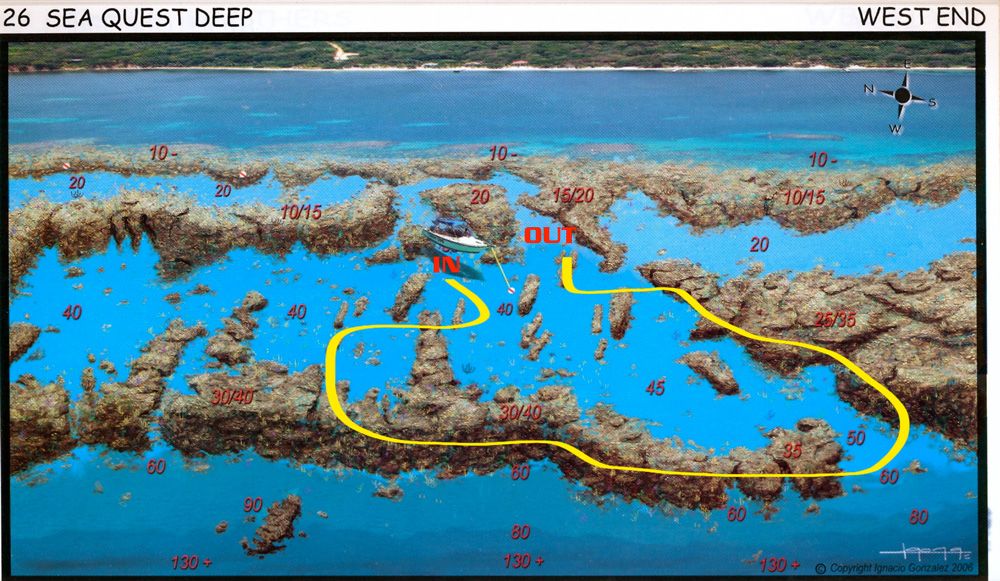 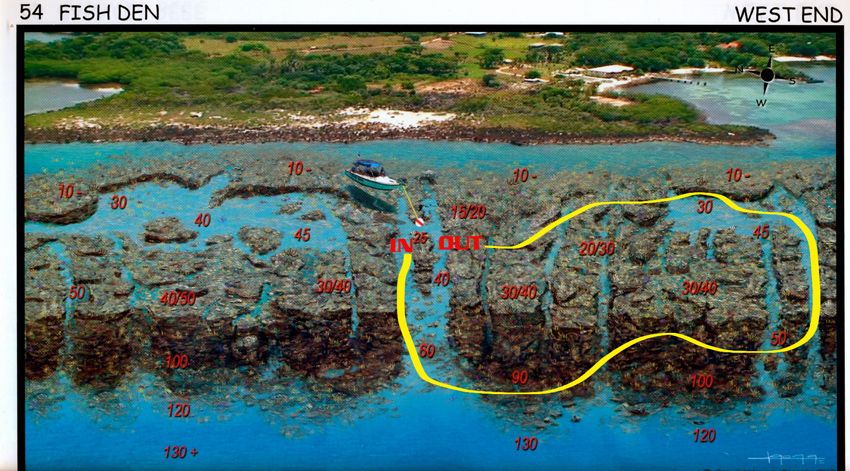 On this dive site there’s a channel that crosses the crest of the reef in West End. There’s encrusted coral and variable boring sponge on its wide variety of patterns. Possibilities to observe Tiger and Nassau Grouper. Also a great snorkeling site. 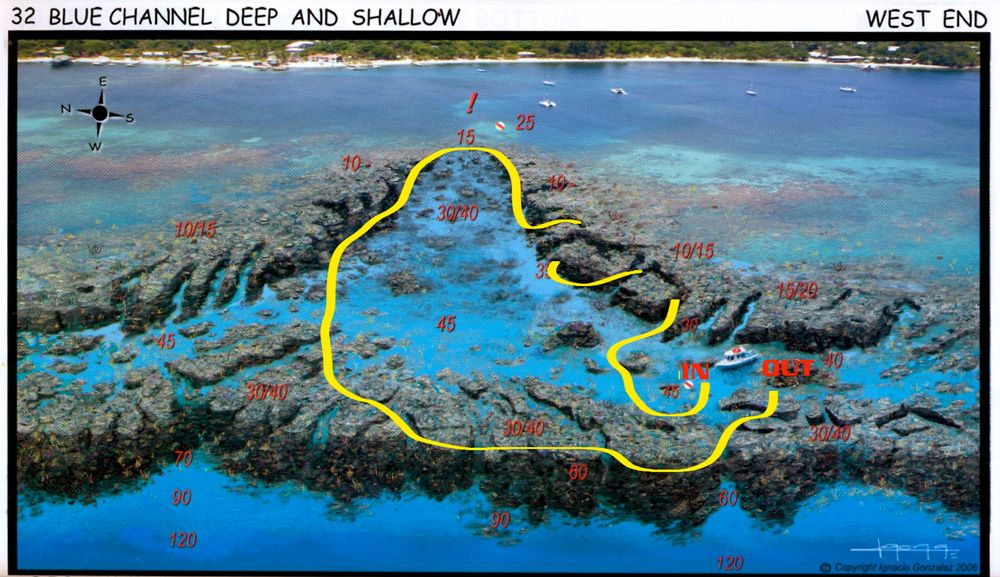 Shallow depth ideal for snorkelers. Extensive plateau cut by deep crevices with sandy bottoms. On these crevices its possible to spot a resting nurse shark and different types of sea cocumbers. The reef wall inclines from 50 to 120 ft. 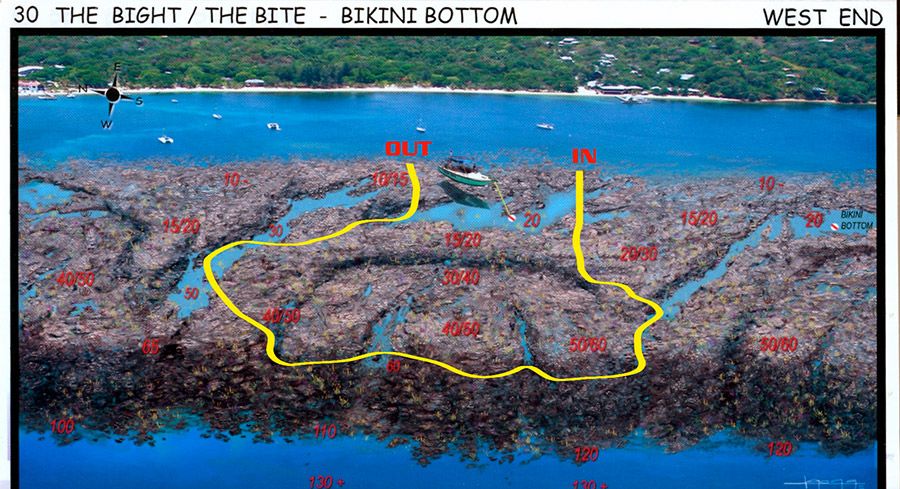 Site offers a different topography, can be done as a drift dive. You can see channels with a depth of 50ft, dive throught the very alive wall. Divers will encounters Deep Water Sea Fans. 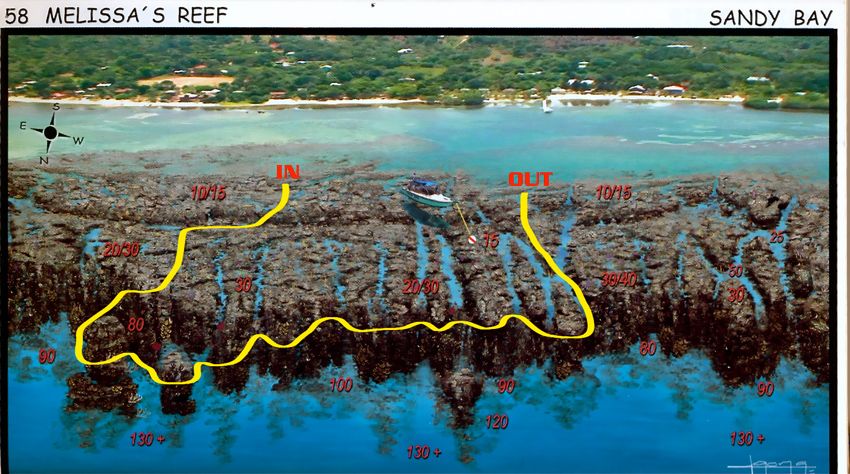 Named after its pinnacle shaped coral formation. Upper part there are deep crevices. Wall drops down to 80 ft. Theres a cavern south of the buoy. Opportunities to see Spotted Drumfish, Channel Clinging Crab, Caribbean Spiny Lobster, and others. 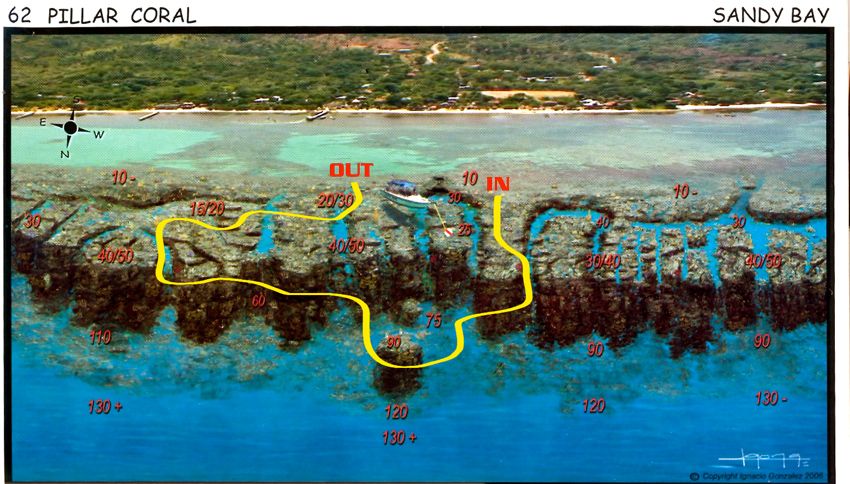 Hole in the Wall

Theres to different ways to perform this dive site: shallow or deep. This site is well known for its swim through which can be very deep. It is located infront of Mangrove Bight in West End.
This dive also offers an incredible wall life, and a variety of fish life. 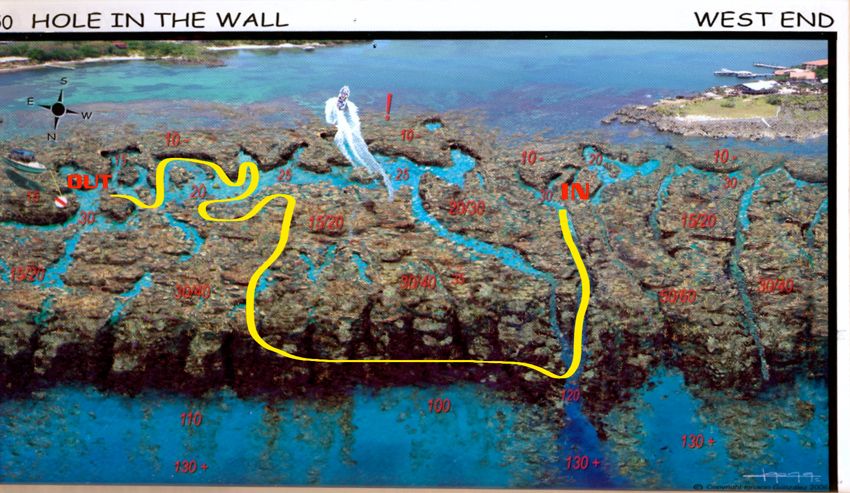 Infront of West End, beautiful sponges, and an amazing visibility. Another of Roatan’s amazing wall dives. 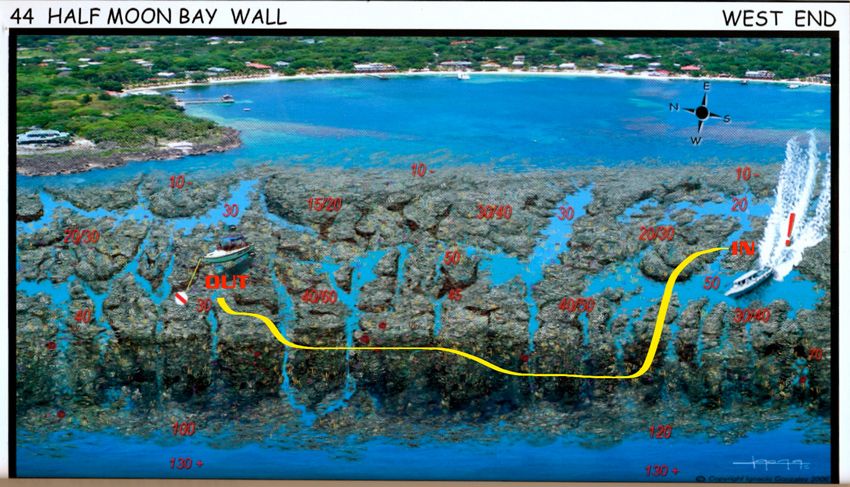 Very peculiar dive site. Its located in a huge reef rupture in Sandy Bay area. Its a 20 minute boat ride. visibility can be very good or very bad, thats why they call it SPOOKY channel.
The site contains a very strange reef structure. Opportunities to see big groupers and creole wrasse. 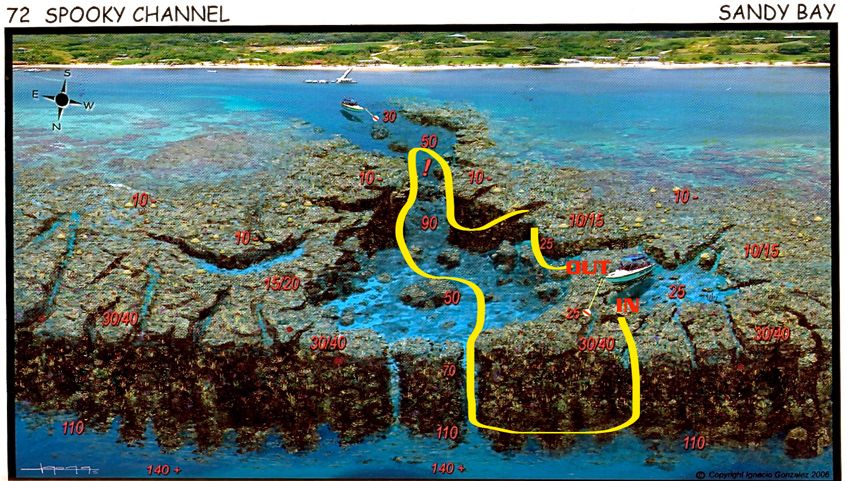 Light House Reef is a drop off located about 15 minutes by boat from West Bay Beach. An incredible variety of pelagic fishes and reef fishes. Hammerhead Shark have been seen. Mooring line is available and usually sea conditions are superb. 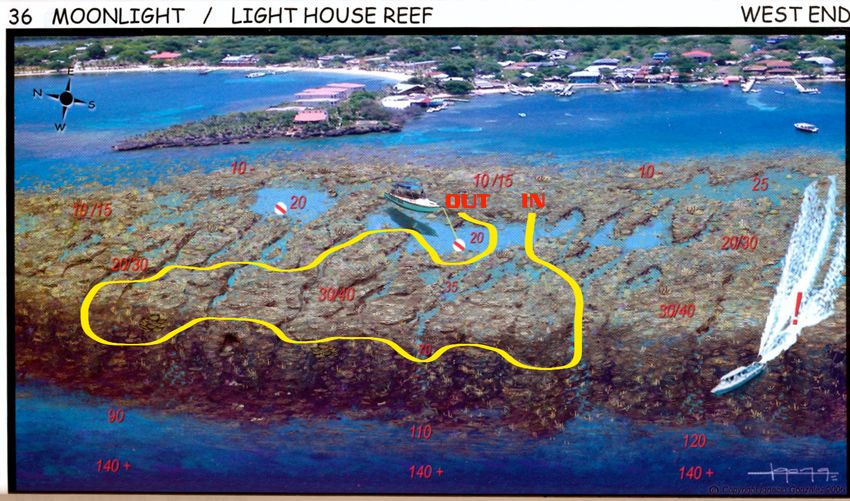 Our home shore dive. Just a 5 minute walk from our dive shop. Very easy dive, really good for begginers with a big space full of garden eels. Theres a lot of sandy patches and a wall drop off to 60 ft. Very unique site for night diving. 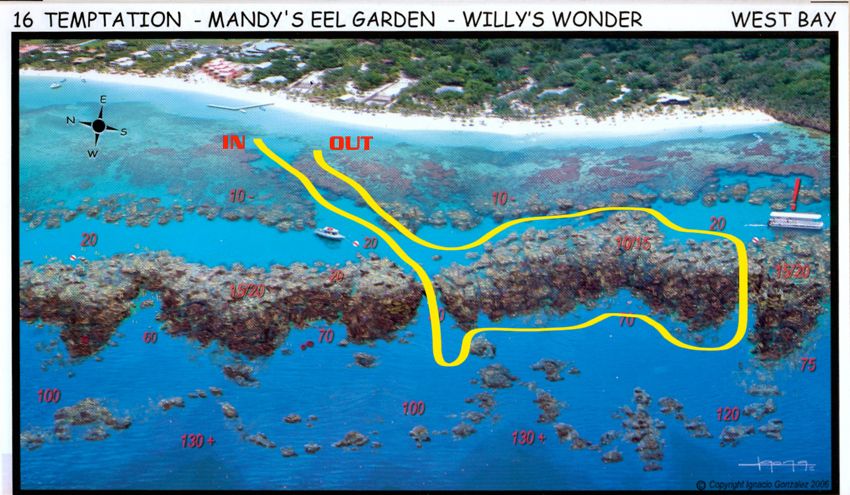 Very reknown dive site located in West Bay. Theres’s a constant curren most of the time. Site offers sightings of beautiful soft coral, gorgonians, and a beautiful drop off wall. 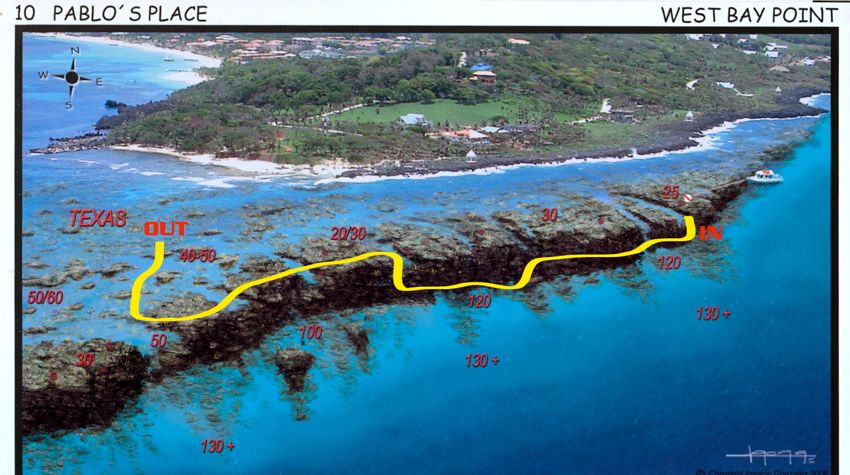 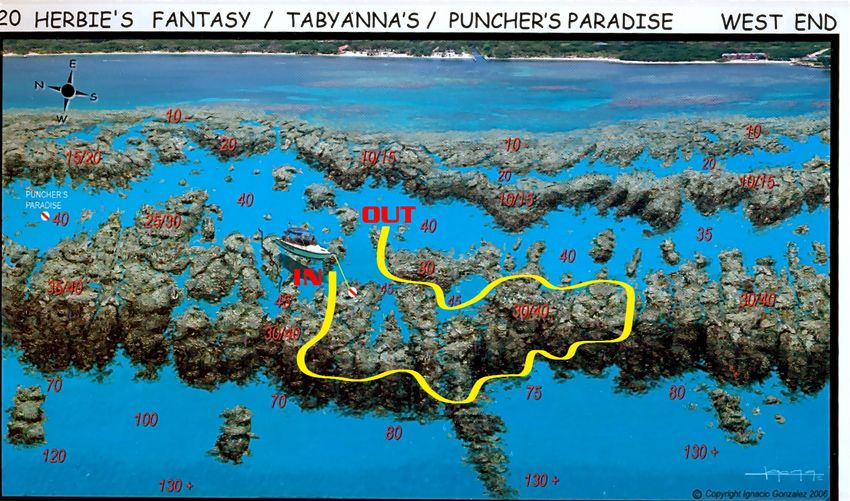 One of the most famous dive sites on the north side of the island. Sometimes theres current, which means theres a lot of life. Amazing drift dive. Schools of fishes: barracudas, snappers, groupers among others. Theres also tons of creole wrasse. Keep your eyes open for hammerheads, manta rays and eagle rays. 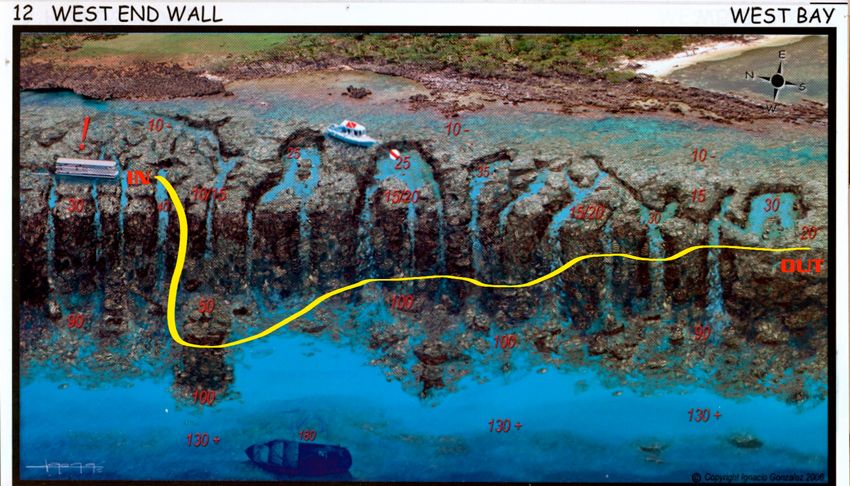 If you come to Roatan you have to do the Wreck, called El Aguila. 150 ft long boat sunked at 110 ft since 1997. Theres a lot of coral, very nice visibility (75-100ft) . Good chance of finding big king crabs and morray eals. Lots of big groupers and snappers. Theres also a beautiful wall right next to the wreck. Theres lots of canyons. Perfect both for diving and snorkeling. 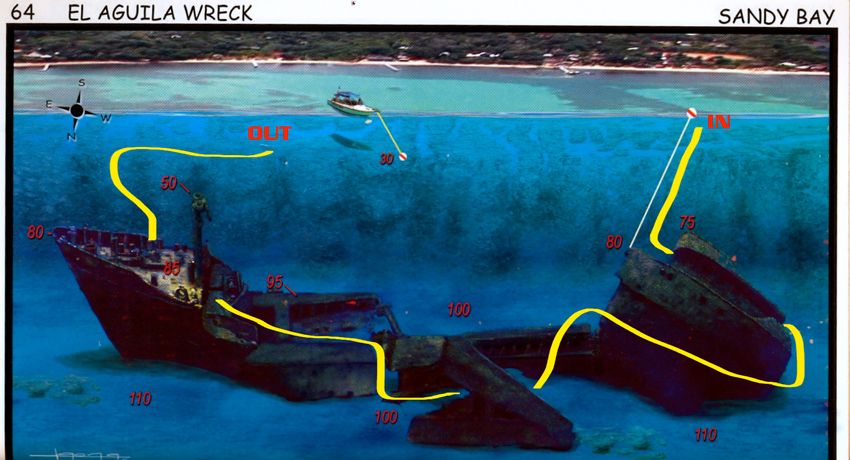 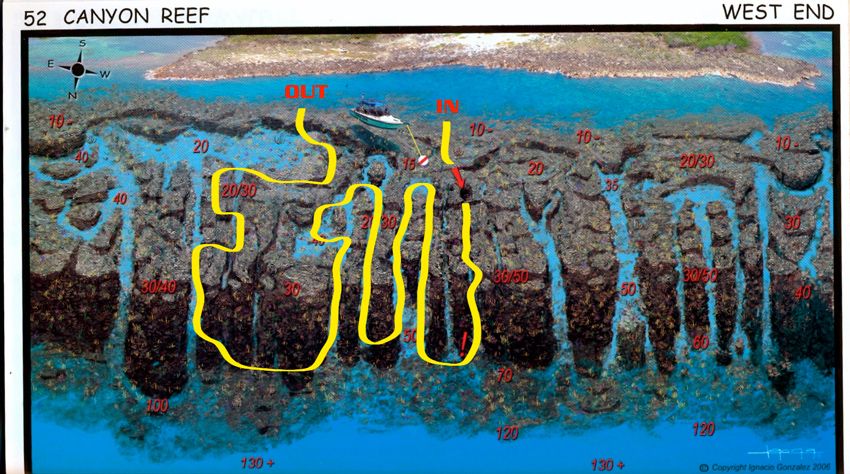 Great for snorkelers and divers. There’s opportunities to see both Hawksbill and Green Turtles gliding through the water. There’s also a great deal of overgrown Tunicate, making the reef look like cement was poured over it. 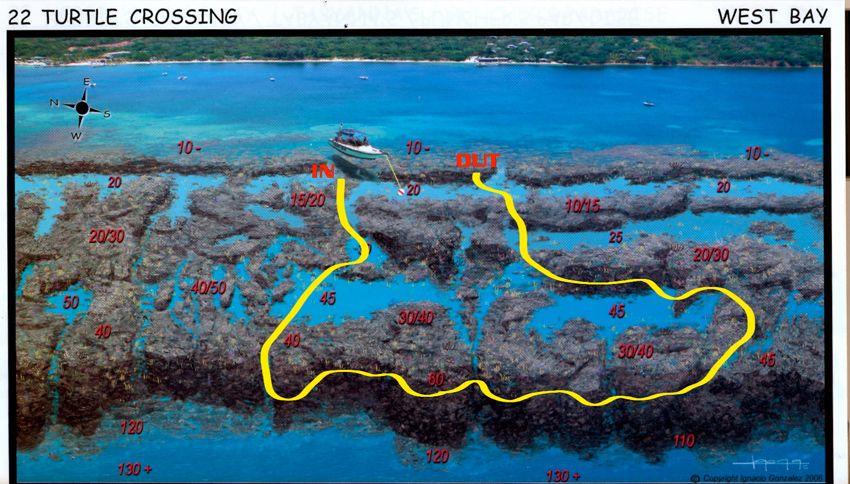