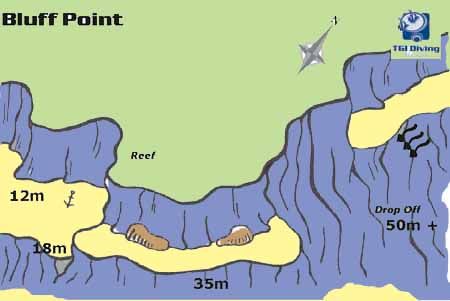 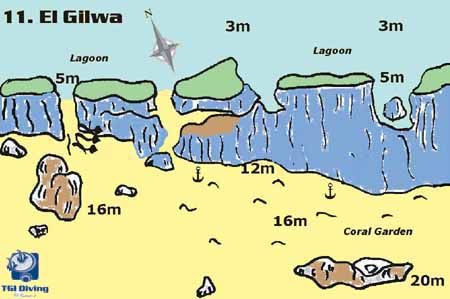 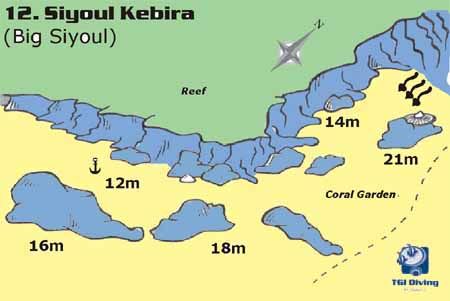 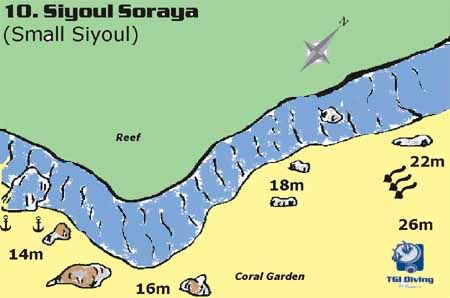 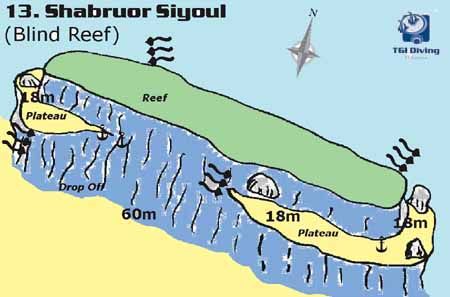 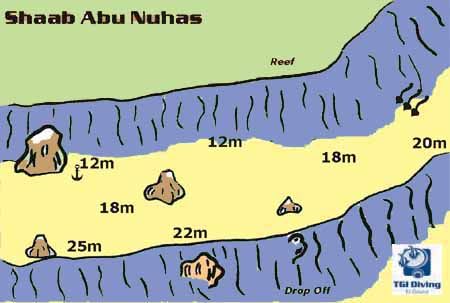 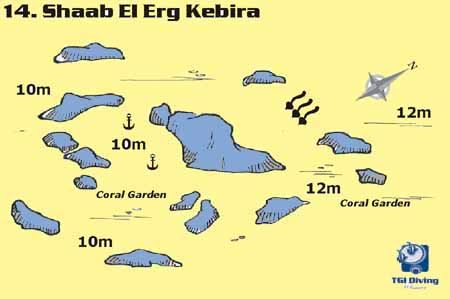 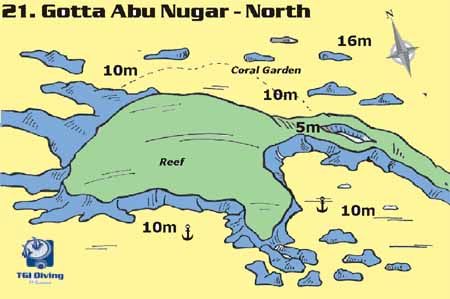 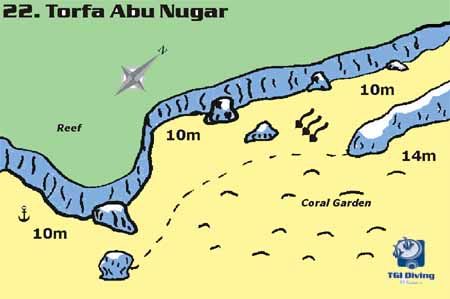 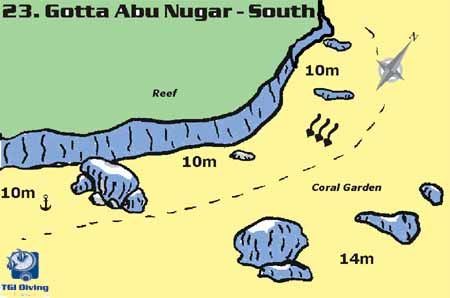 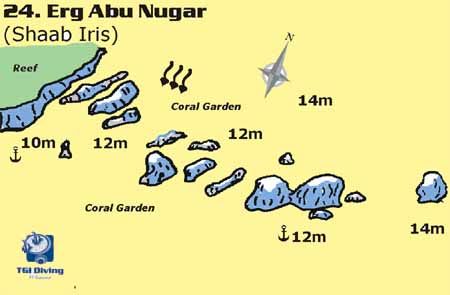 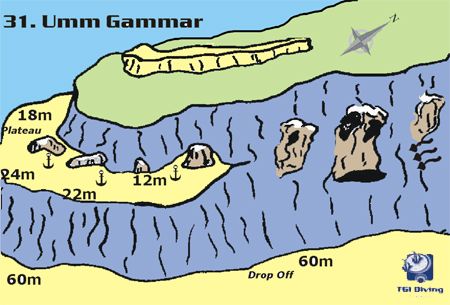 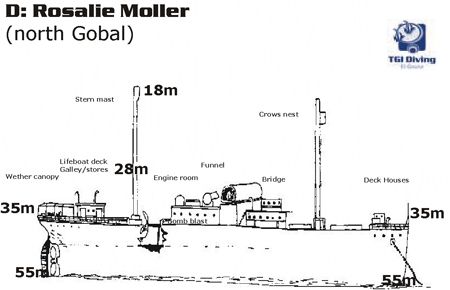 The Rosalie Moller met the same fate as the Thistlegorm just two days later, she was moored at the ‘safe anchorage’ to the north of Gobal Island waiting orders to complete her Journey to Alexandria, when she was struck by German Heinkel bombers. Two bombs hit her and she quickly sank, like the Thistlegorm she remined upright as she settled on the sea bed. Only two of her crew were killed in the bombing, the rest managed to get into the life boats and escape.The ship was around 96meters long with a 3963 tonnage built in 1910 in Glasgow. She began her life with the name Francis, which she kept until 1931 when she was sold to the Reederei Moller Line of Skandinavia, was refitted with an extra Galley and Lifeboat deck, and became the Rosalie Moller. In 1938 she was requisitioned by the merchant navy to deliver coal supplies to ports where forthcoming convoys would be refueling.She remained undiscovered for a long time, as although records showed that she was struck by Heinkel bombers, they also reported that she had been salvaged. Investigations found discrepencies in the records, including reports of the ship ‘ST Francis’ never being salvaged, and so a group of divers started searching for her, in 1993 she was found. However due to her location and depth she is not dived so often like her famous sister, and so is remrkably in tact, even the main mast is still vertical.Her cargo is rather less interesting than the Thistlegorm, as she was mainly carrying coal supplies, however as she has been at rest for a long time and relatively undisturbed the life around her is nothing short of stunning.As you descend onto te decks you will find it hard to see the wreck for all of the glassfish that suround her, all these glassfish make a giant sized restaurant for larger fish such as Jacks and Tuna who swoop in for an easy meal. Huge lion fish can also be cruising through the shoals of glassfish, along with a whole selection of other fish. Looking into cracks on the wreck you can find some exceptionaly large shrimps. At the end of the dive you can ascend up the mast, which is still upright, and take a look at the crows nest now at around 20 meters.However this dive is not for every diver, the decks are at 35meters and the seabed at 55meters so only short dives are possible here, and only for divers with training and experience in deep and wreck diving, those who are qualified to visit this wreck will find a real treat, most divers even prefer this to the Thistlegorm, and it is only 1hour 45mins by boat away from El Gouna 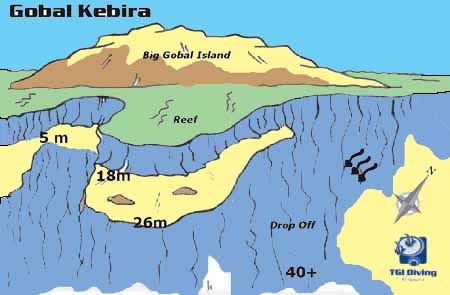 Gobal Kebir, and Agus garden. The location and deep water offer the chance to see some larger marine life, rare black corals of the Red Sea are found in abundance here. Turtles are also frequently sighted, along with a vast collection of Red Sea reef fish and the occasional encounter with a turtle or a pod of dolphins. 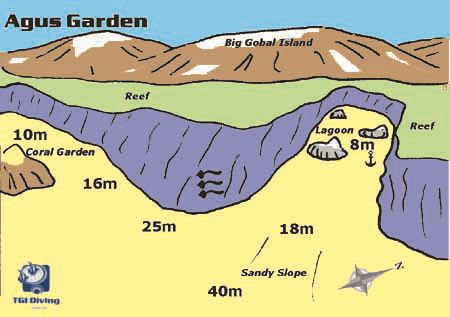 The reef system called Umm Gosh or Umm Usk is home to two fascinating dives, the main reef has a coral garden and a drop off which can also be taken as a drift dive. In the coral garden eagle rays can sometimes be seen swooping past, along the drop off schools of tuna often pass by. The table corals offer a shady place for a blue spotted sting rays and giant morays to rest. The second dive spot Gotta Umm Gosh is a small patch reef next to the main reef, the coral garden here is full of all kinds of reef fish, and occasional a leopard shark can be found sleeping in the sand. 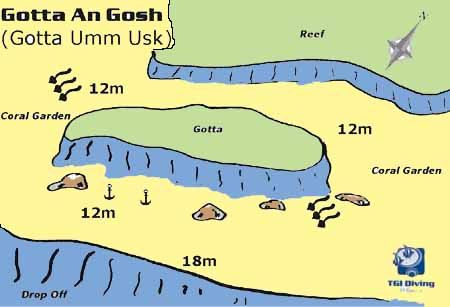 As this dive is at the north end of the exposed reef of Siyoul Soraya it can only be reached with the best of weather conditions. For those lucky enough to visit the spot the coral garden is stunning, a huge range of colorful hard and soft corals can be found here. As well as the corals this spot is also home to a great variety of fish, and eagle rays are sometimes sighted here. 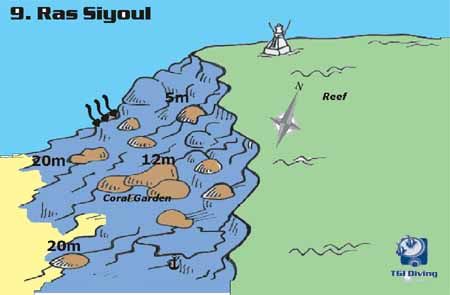 Ghiannis D. suffered from navigational errors in 1983 due to suspected engine failure, and took a full 2 weeks to finally sink. She now lies on the sea bed with a minimum depth of only 5 meters and a maximum depth of 25 meters. There are plenty of interesting parts of this wreck including the engine room which is very easily accessible and is always filled with thousands of glassfish, she also offers some great wideangle photo opportunities. 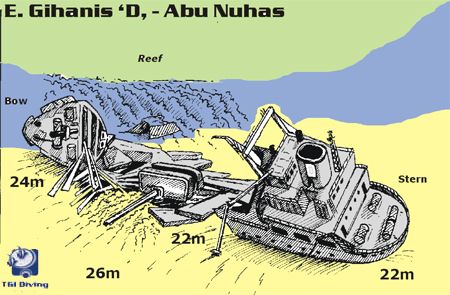 Carnatic, a British motor-sailor built in 1862, sank the night of 14th September 1869 after striking the reef due to a navigational error. Carnatic is lying on her port side, parallel to the reef on the sandy bottom. Min depth 15 meters and Max depth 27 meters. Now she is a skeleton encrusted with hard and soft corals, giving some great opportunities for photographers. 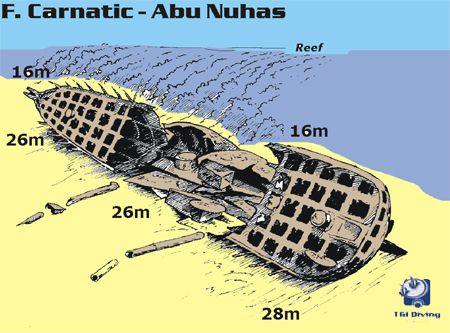 this wreck was carrying tiles which can still be seen in the holds and scattered around the sea bed. The ship collided with the reef in 1981 and subsequently sunk. The dive is suitible for all levels of divers as the wrecks shallowest point is at 5 meters and the deepest parts 25 meters. The wreck has suffered badly from the action of the weather and as such is not stable for penetration dives, but it makes a very nice dive, many fish and corals have taken up residence in and around the wreck, and a lucky diver may even spot a large Napolean fish or turtle. With the right conditions this wreck can also be dived in one dive together with the Kimon M, as they lie quite close to each other. 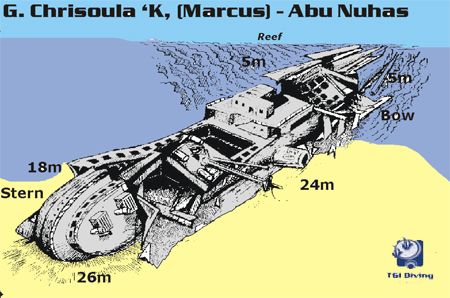 The Kimon M was another cargo vessel on route through the Red Sea, she was fully loaded with lentils, which eventually served as fish food leaving her cargo holds empty. She does not have as much coral growth as the other Abu Nuhas wrecks, but she is home to a large selection of fish, and so still makes an interesting dive. As with some of the other Abu Nuhas wrecks there was some controversy over her identity, for some time she was believed to be the wreck of the Sea Star, and is referred by that name in many books about the area. 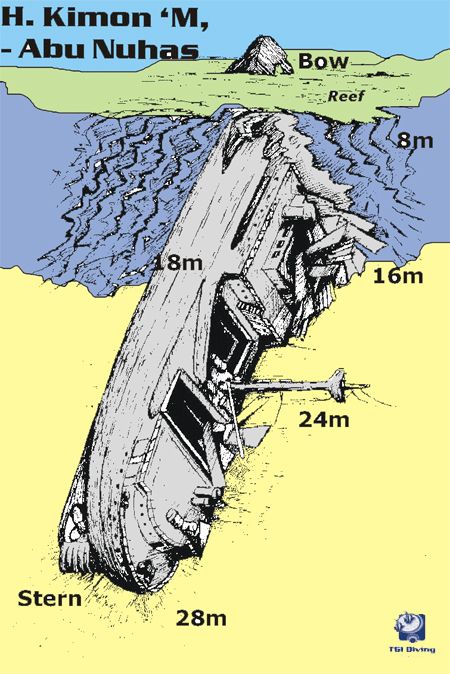 Shaab El Erg is a horseshoe shaped reef around 7km in length with 5 different dive spots:
Dolphin House is a small patch reef on the northern tip, and is so named as dolphins are frequent visitors to this spot, and they often stay around to play, but even if you don’t see the dolphins the dive spot is beatiful, with a range of colourful hard and soft corals. Small crevices in the reef are filled with glassfish, and turtles can be found around the coral garden. 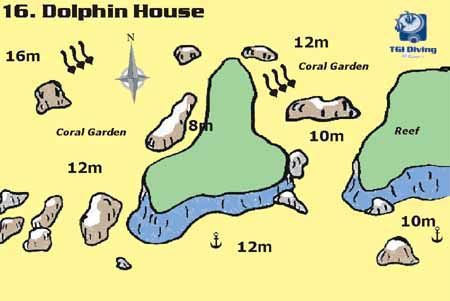 Located to the north of Abu Kalawa is the small patch reef Ras Abu Kalawa, sometimes called Shabaha. The reef lies below the surface by about 4 meters so it does not provide any shelter for boats to moor and so can only be accessed in good weather conditions. During this dive you can make a complete circuit of the reef and also have time to explore the smaller outlaying blocks. Due to the location there is sometimes strong current, this makes the dive site a perfect home for reef fish, all of which can be fond in large numbers here. Vibrantly coloured soft and hard corals are all around. Turtles and dolphins are often sighted here, as well as feather tailed sting rays in the winter months. This dive sight is often chosen as a night dive as it offers a wide variety of life and very easy navigation, starting a night dive at sunset, you can watch the complete transformation from day to night, many of the reef fish find a sheltered crevice to sleep, and the night hunters such as lion fish, lobsters and octopus start to come out of there daytime hiding places, around some of the small coral blocks shrimps eyes glow in the torch light, and you may even be lucky enough to see spanish dancer. 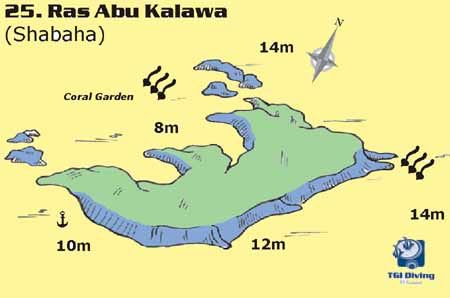 Marsa Abu Kalawa is located at the southern end of Abu Kalawa, a large lagoon offers a safe mooring places. Swmming out of the lagoon across a sandy area there is a large patch of garden eels, but take care to go slowly as they descend into the sand with the slightest disturbance. after this a drop off starts from around 16 meters to 35 meters, along the drop off turles can sometimes be seen, back along the main reef white morays, lion fish and stone fish can all be found along with a large variety of reef fish, leave some time at the end of the dive to go into the lagoon and explore the sea grass beds there, you may be lucky enough to find two different species of seahorses.
Saqua Abu Kalawa is on the eastern side of the main Abu Kalawa reef there is a small lagoon where boats can moor, from there follow the reef wall to the north, along the wall there are many gorgonia corals, soft corals in vibrant colours, and many small crevices where morays and groupers can be found hiding. Further to the north there is another small lagoon where you can see schools of trumpet fish, or during the wintemonths you may find a large feathertailed sting ray sleeping in the sand. Dolphins are also occasional visitors at this spot, when stronger currents are present it also makes a nice drift dive.

Located to the south of Abu Kalawa is drop off with a series of coral blocks along the top, around each of the blocks you can find large schools of fish such as Jacks, sweetlips, Unicorn fish and fusileers. Take a closer look at the blocks and you will also find a selection of smaller sea creatures such as pipe fish and shrimps, in the coral garden around the blocks Turtles and Giant Morays can sometimes be spotted.

El Fanadir is the furthest south our boats from El Gouna go, and so overlaps with some boats from the north of Hurgahda, although they can be busier than other sites they are still well worth a visit. El Fanadir North has a reef wall till 12 meters, then a plateau extends out to 20 meters giving way to a drop off reaching well beyond 30 meters. Although the corals here are not as spectacular as in some other sights the reef is home to an amazing diversity of reef fish along with some more rare and unusual fish such as the trunkfish, a member of the boxfish family, but with an odd triangular shape, the elusive frogfish has been sighted frequently here. El Fanadir South also has a reef wall till 12 meters then a plateau and drop off. Here on the plateau there are some beautiful coral blocks that are home to glass fish, lionfish, morays and a variety of shrimps. Along the drop off tuna and barracuda can sometimes be seen. Ras Fanadir is a smaller patch reef to the north of the main reef surrounded by coral garden with a wide variety of hard and soft corals along with a large selection of reef fish, and the chance to see feather tailed sting rays during the winter months.