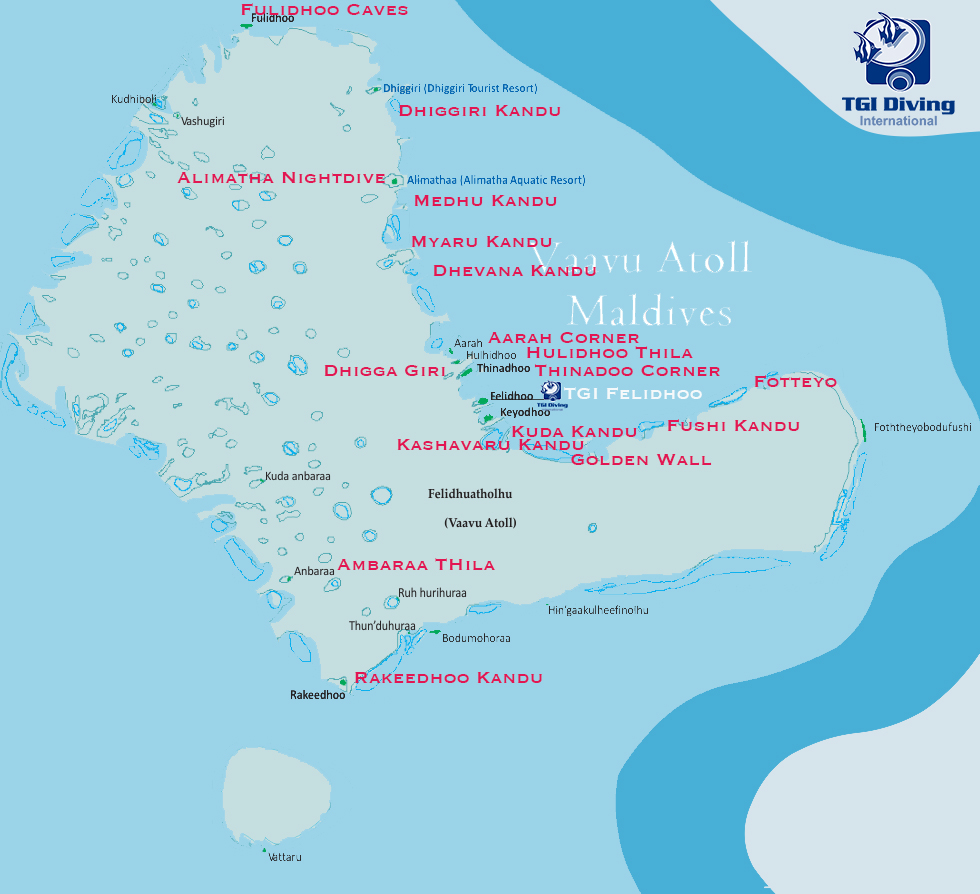 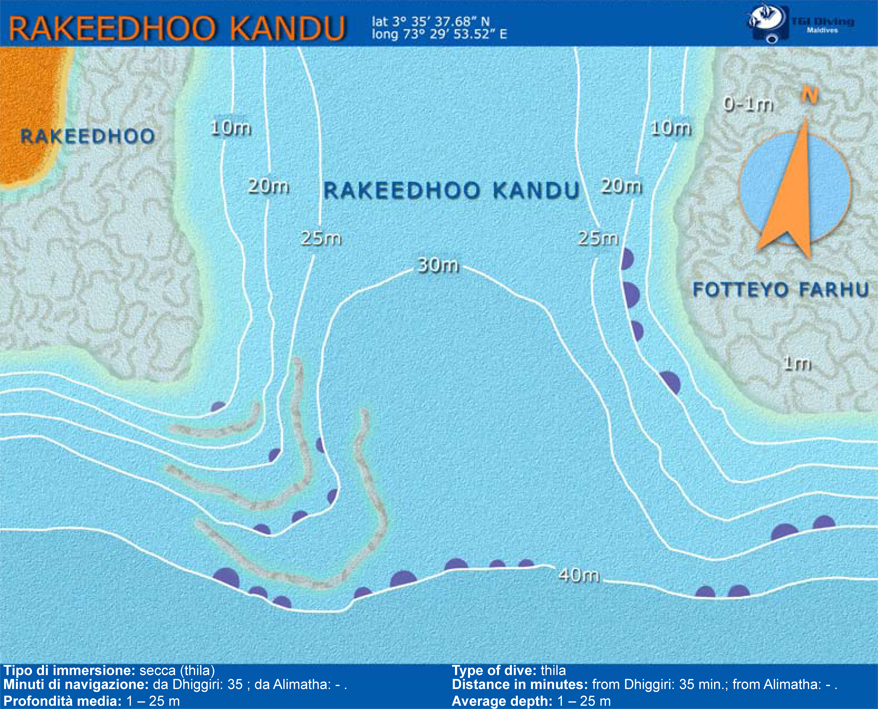 Experience level: If the current is stronger, this is a site for intermediate and advanced divers.

Fauna: Situated in a channel between two islands its possible to encounter some larger species such as grey reef sharks, whitetip reef sharks, mako sharks and even hammerhead sharks. There is also the chance of seeing manta rays, eagle rays, barracuda, travellies and groupers. The corners and overhangs that can be found along the site are nicely covered with blue and white soft corals.

Particular features: The corner itself is the most interesting part of the site due to its richness in coral and fish life. There are many caves and overhangs creating terraces up to 50 m wide. The dive site can be split into two, with the eastern and western sides offering two separate dives.

During the North-East Monsoon: Generally the current flows from North to South, so the dive starts on the outer reef. Stay shallower on the out reef at around 20m, before going deeper once reaching the corner. This will allow enough air and bottom time to enjoy the caves and overhangs that are full of soft corals. Head back to the shallower water until you reach the beautiful and colorful top reef.

During the South-West Monsoon: The current normally reverses and flows from South to North. During this season, the dive starts inside the channel, not too far from the corner as the inner reef is not very interesting. Once you reach the corner, follow the dive as during the North-East monsoon.

Safety consideration: Pay more attention to your dive computer and pressure gauge as it is easy to stay relatively deeper and longer due to the formation of the corner. 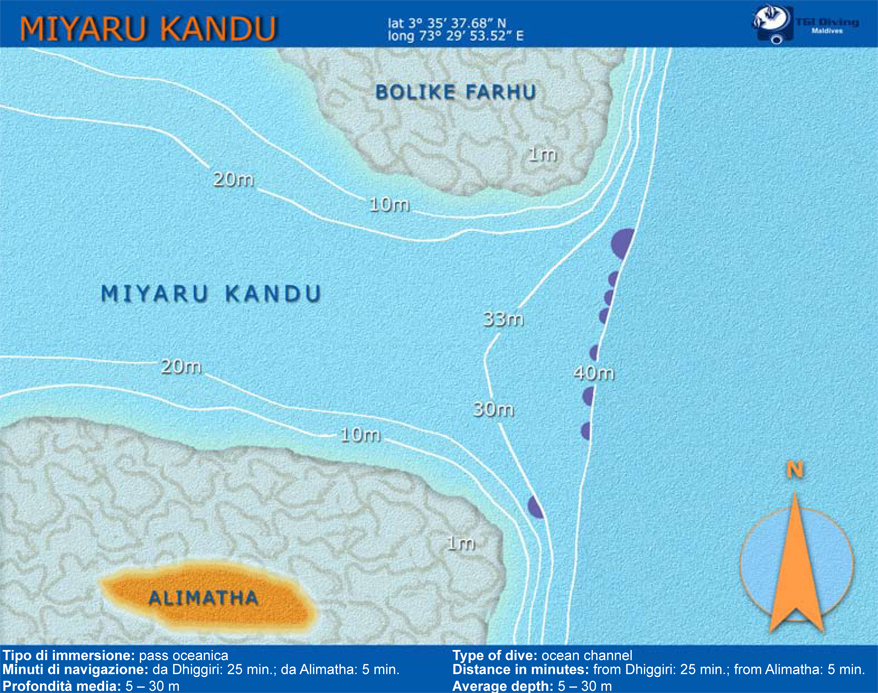 Experience level: Can be difficult for less experienced divers when there is stronger current.

Fauna: Grey reef and hammerhead sharks can be seen with an incoming current; whitetip reef sharks, jacks, fusiliers at the channel edge; turtles, napoleons, groupers and sometimes also eagle rays on the edge and in the channel.

Particular features: Nice caves can be found on the northern corner with black coral and whip corals lining them; living within the caves are moray eels, big groupers and a lot of glass fish.

During the North-East Monsoon: The current is mostly flowing into the Atoll and the site can be dived with the reef on the right shoulder. During this season many grey reef sharks, hammerheads and a large variety of fish patrol the channel edge. As you continue the dive into the channel, you’ll find some caves. Inside the channel, a backwash area can extend quite some distance up to a distinctive potato coral. Follow the sandy slope to the coral reef to finish the dive well within the channel.

During the South-West Monsoon: The current reverses and is mostly running out of the Atoll. Keep the reef on the left shoulder. Start your dive on the sand slope where it is possible to see, in this period of the year and sometimes on the surface itself, manta rays; further on there are some small caves around 24m where grey reef and whitetip sharks and mantas may be observed. A bigger cave can be explored at the corner of the channel at 22m. Continue the dive on the outer reef where you will encounter many large schools of fish.

Safety considerations: In presence of strong currents descend quickly to the reef.

Experience level: easy diving, also suitable for beginners, because there is seldom a strong current

During north-east monsoon: mostly current flows reef from north to south; so the reef is on your right side; you’ll find overhangs between 8 and 30 m; when caves finish, go up to about 10 m and you can see of stag horn acropora and a lot reef fish; on the reef top often you’ll find turtles

During south-west monsoon: mostly current flows reef from south to north; so the reef is on your left side; otherwise same as north-east monsoon season

Safety considerations: not recommended, when you have big waves, as you feel constantly the wave surge 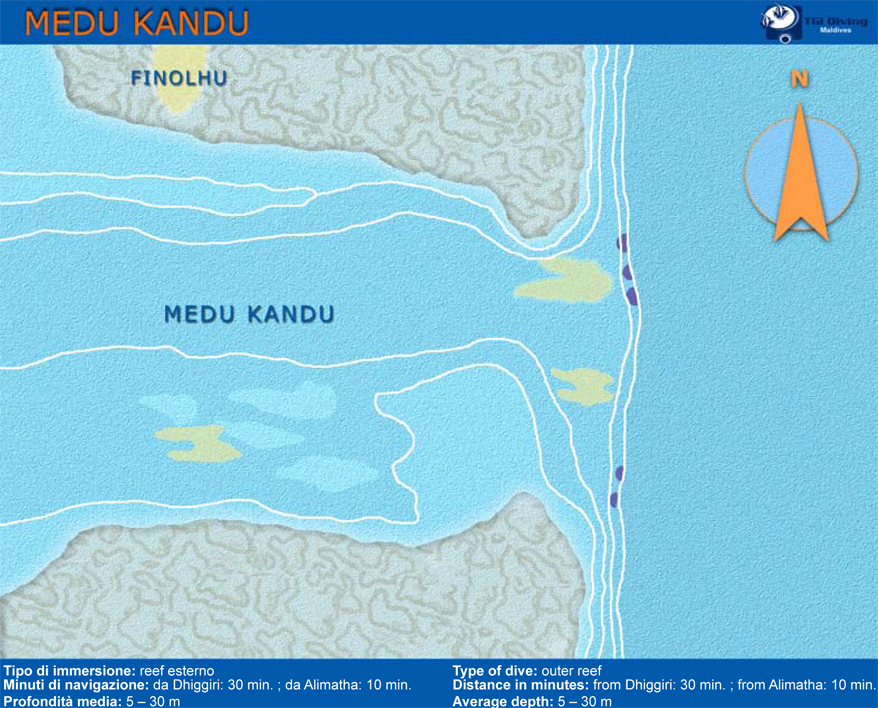 Experience level: Suitable for all experiences with small or no current. With a medium-strong current, the dive is for experienced divers only.

Fauna: Along the reef edge, you can see many schools of fish, such as pyramid butterfly fish, oriental sweet lips and sergeant fish. Keep an eye out for whitetip reef sharks, napoleons, and eagle rays passing by.

During the North-East Monsoon: Dive with the reef on your right shoulder and keep your eyes peeled along the wall for moray eels and turtles. Occassionally whitetip reef sharks and eagle rays are passing by in the blue water.

During the South-West Monsoon: Keeping the reef on your left hand side, continue your dive on the outer reef looking out for whitetip reef sharks, napoleons and eagle rays. Schooling fish can be found along the reef edge.

Safety considerations: As the wall invites for a deeper dive, keep an eye on your computer and depth! 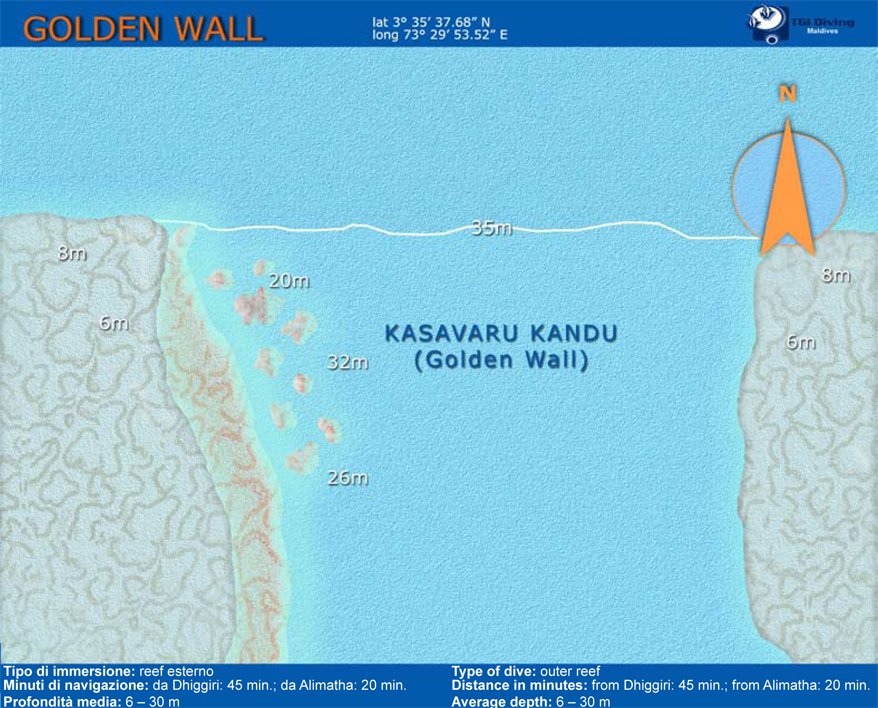 Fauna: Expect to see Napoleons, turtles, moray eels and a lot of reef fish. In the blue water pegalics can often be seen passing by. A large wall that’s packed full of yellow, blue, pink and white soft coral (alcyonaria).

During the North-East Monsoon: The current usually flows from North to South so the reef will be on your right hand side. Caves and overhangs can be found inside the channel. Turtles can often be found on the top reef.

During the South-West Monsoon: The current usually flows from South to North and puts the reef on your left hand side.

Safety considerations: Not recommended to dive here when there are big waves. 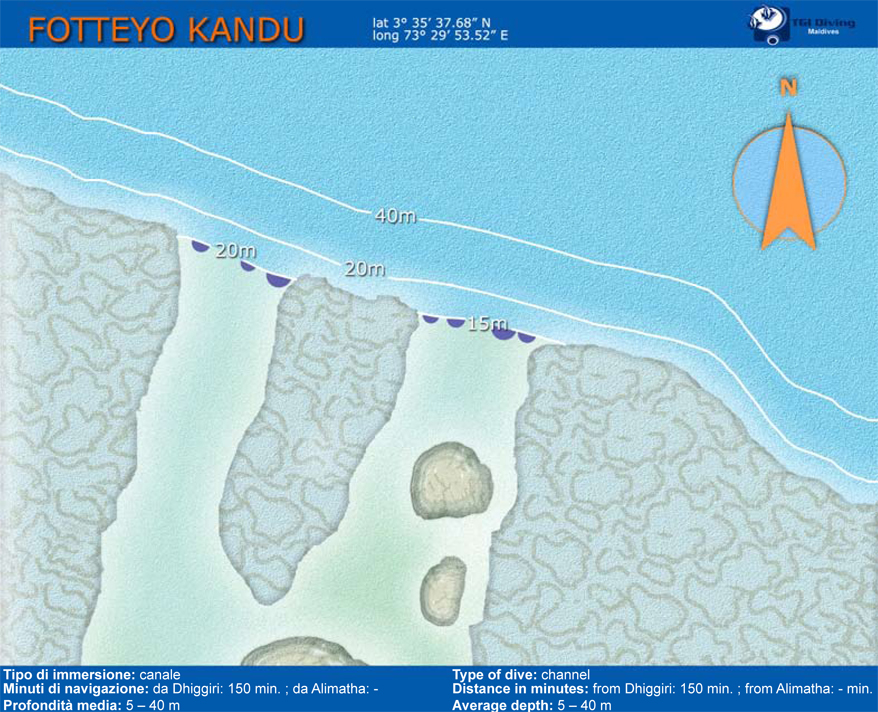 Experience level: not suitable for beginners

Particular features: beautiful thila in the middle of channel; at the front of channel edge, between 20 and 40 m, big interesting caves

During north-east monsoon: mostly ingoing current; stay below the edge and have a look at the beautiful caves with its yellow soft corals; cross the entrance before the thila and stay at the edge as long as possible; great variety of fish life in the open water; as thila is not very long, don’t let go to early with the current into the channel; for a second dive choose the east part, as it is not so deep

During south-west monsoon: mostly outgoing current, start in the channel at the very end of the thila; drift out of channel over the top of thila and choose for one dive reef to the right; it’s better to do a second dive on the east part, as these caves are not as deep as those on the west side

Safety considerations: watch your computer, as the wall is strongly inviting to a deeper dive; try to avoid long decompression times 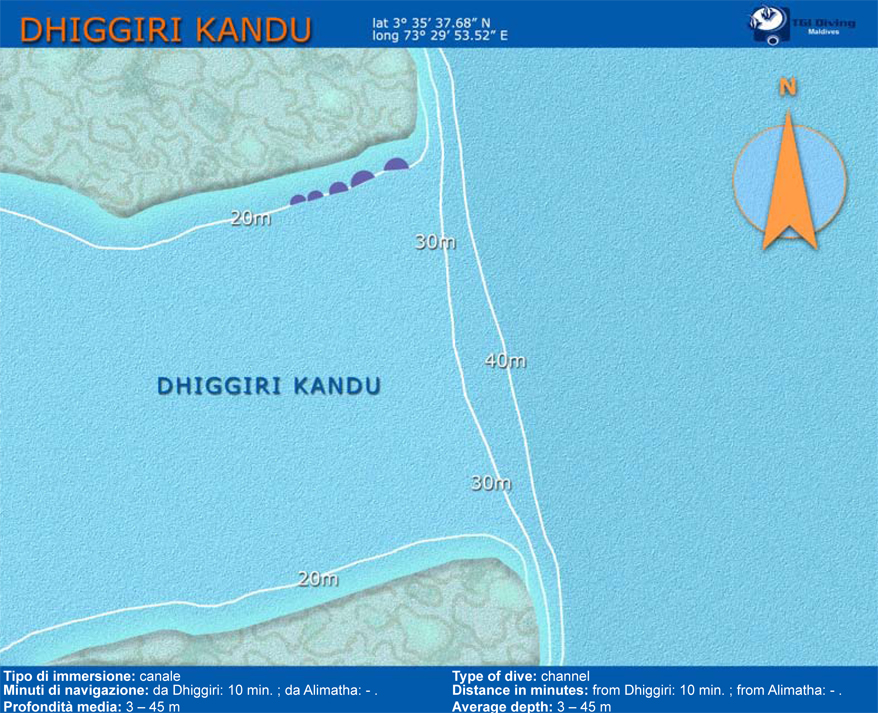 Particular features: channel edge is quite deep, starts at about 40-45 m

During north-east monsoon: mostly ingoing current; reef to the right; as the channel edge is rather deep, not recommended with non-experienced divers; there is a chance to see grey reef and other sharks at the entrance; large schools of jacks; below the edge there are overhangs with big gorgonians

During south-west monsoon: mostly outgoing current; reef to the left; in the channel over the sandy bottom you’ll find some big coral blocks on the reef flat and many fish groups

Safety considerations: if you want to go to the edge, take only experienced divers, as you might get a decompression time 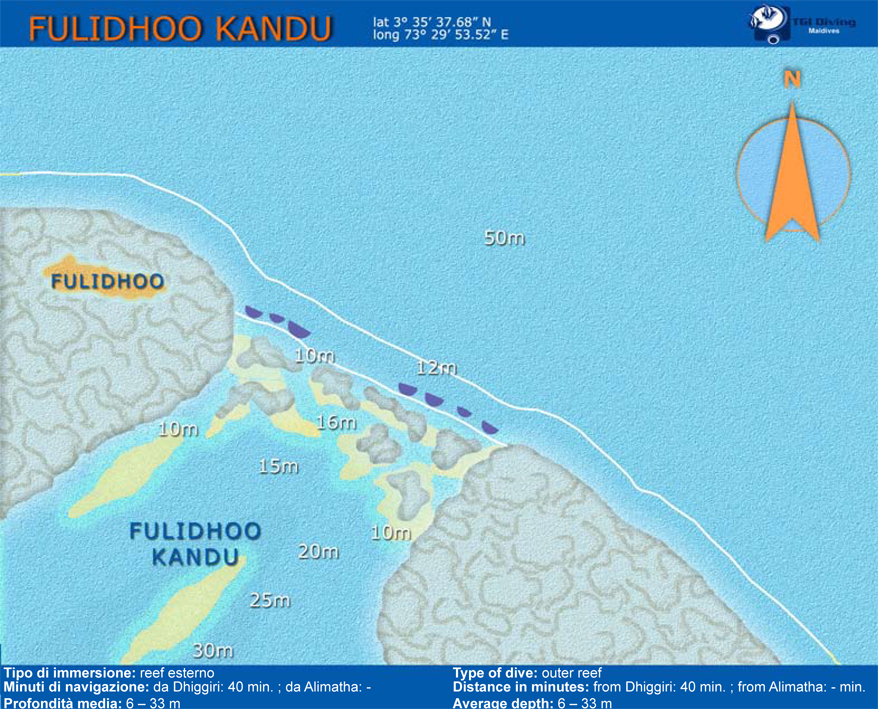 During north-east monsoon: mostly reef to the left; between 20 – 30 m caves, where you find nice soft corals; on the reef flat there are beautiful stone corals; at some parts you’ll find schools of blue-strip snapper and banner fish

During south-west monsoon: mostly reef to the right; otherwise like north-east monsoon season

Safety considerations: watch your computer, as caves are quite deep and you can easily get a decompression time 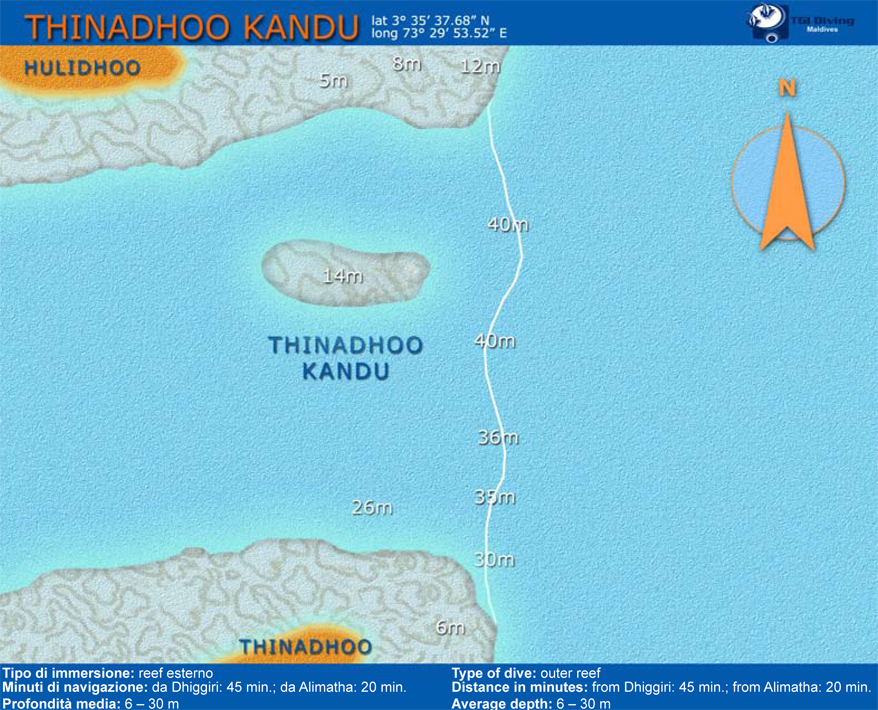 Experience level: Suitable for all experiences if there is little or no current.

Fauna: Keep your eyes open for napoleons, turtles, moray eels and a lot of reef fish. The blue water offers the chance to see larger pelagics such as tunas, white tip reef sharks and grey reef sharks. Many black coral bushes can be found in deeper than 20 meters.

Particular features: Caves, overhangs, and a pinnacle in the middle of the channel.

During the North-East Monsoon: The current usually flows from East to West; keeping the reef on your right hand side, overhangs can be found between 8 and 20m. Turtles can often be found on the top reef.

During the South-West Monsoon: The current usually flows from West to East; keep the reef on your left hand side.

Safety considerations: Be careful with a potentially strong outgoing current.